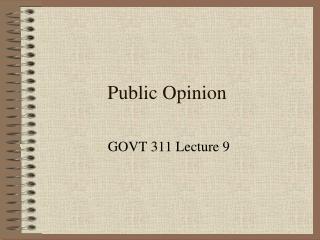 Public Opinion. GOVT 311 Lecture 9. What is Public Opinion?. An aggregation of individual opinions Reflection of the majority produces conformity on controversial issues Pluralism, the clash of organized interests Intensity of opinion Media and elite opinion A myth, it is rhetoric

Public finance Course 1 Framework and tools - . introduction. what is public finance ? study of the taxing and spending

Myths and Facts about the Middle East conflict Ben-Dror Yemini - . israel is described as the great menace to the world