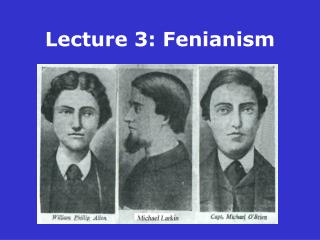 Lecture 3: Fenianism. Themes that dominated Irish life and politics 1848 – c. mid 1870s. The altered social balance in the countryside The development of expatriate nationalism The modernisation of Ulster’s economy & politics The emergence of a disciplined nationalist parliamentary party.

Lecture 6 - . please hand in your lecture problem before lecture. it will not be accepted once the solution is given in

Lecture 20 - . chemical reaction engineering (cre) is the field that studies the rates and mechanisms of chemical