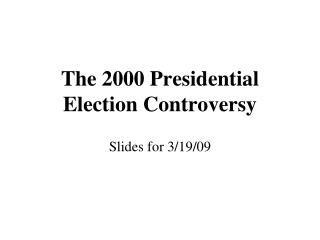 The 2000 Presidential Election Controversy. Slides for 3/19/09. Analysis of Bush v. Gore Equal Protection Claim. Neither side is arguing that a recount per se violates the equal protection clause. The dispute in this case relates to the method being used.

Reconstruction Review (1865-1876) - . scalawags and carpetbaggers were… welcomed as saviors in the south during

The Structure of Society: Organizations, Social Institutions and Globalization - . chapter 9. note: this is a sample -

Campaign Financing and Election Outcome - . a study of the correlation between fundraising in the u.s. and popular votes

Presidential Nomination and Election - . section 3 chapter 7. focus questions. what is the electoral college? how are

Presidential Election Project - . bell work: we have finished our first test and now its time for you to do something

Presidential Election Project - . bell work: we have finished our first test and now its time for you to do something

6. The presidential election process , part 2 - . i. the campaign ii. the election. -the campaign trail /the stump -

1948 National Presidential Election - . splitting the ticket. truman presented a proposal to the congress earlier in the

2004 Presidential Election - . the following two slides show each candidate’s predicted percentage of votes from the