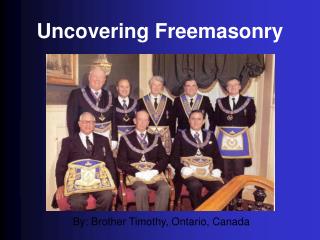 Uncovering Freemasonry - . by: brother timothy, ontario, canada. in ontario, there are 57,664 masons and 611 lodges.

Freemasonry - . worship of lucifer great architect of the universe(g) witchcraft in disguise symbol ∆ and eye of horus

The Organisation of Freemasonry - . a brief introduction by stephen blank. zion menorah. province of east lancs. 320

UnCovering Religion - . christadelphians. uncovering religion. ephesians 5:11 “have nothing to do with the fruitless

Uncovering ED - . national highlights. ed facts. ed affects 2 to 3 million men in canada vascular disease is one of the

Judaism – Uncovering Religion - . introduction. history of judaism – origin who was jewish in the old testament? who

Uncovering the Quabbin - . a local history project involving elementary schools from the towns of pelham, petersham and