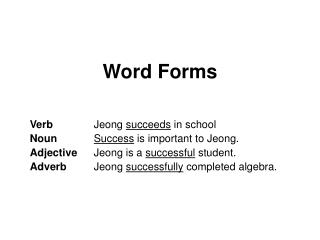 Inflection Word forms Paradigms - . inflection is a morphological change by means of which a word adapts to a

Creating Forms in Word - . create a form. step 1: set up word for creating forms click the microsoft office button , and

Creating Forms in Microsoft Word - . lunch and learn: april 2, 2008. plan ahead. plan ahead for the specific form you

British vs. American Word Forms - . is there a significant difference between british and american word choice?. choosing

Forms - . using ics in communication. “five minutes before the party is not the time to learn to dance!” snoopy circa

Forms - . 5.02 understand database queries, forms, and reports. forms. a database object that is used to create a

Forms - . forms have -. properties events methods remember, a method is something the object does to itself. an

Forms - . the objective :. learn how to build forms, and how to capture the data from a form with a php program. what is