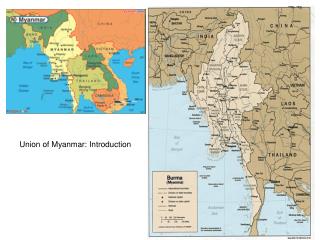 Union of Myanmar: Introduction. Images of Myanmar. Images of Myanmar. Myanmar or Burma?: Politics of the Name From most powerful kingdom of SEA to one of the poorest countries in the world Military, Fear Politics, Armed Ethnic Struggles, Drugs Democracy, Boycott and Humanitarian Intervention. Myanmar - . all about china ? . debating myanmar. a: peterman ran off to burma b: isn’t it myanmar now ? c:

The History of Myanmar - . by, courtney m. . map of burma . early history . it is believed that the mon people were the

Myanmar/ Burma - . “this is burma . it is quite unlike any place you know about .” -kipling. not much is known on the

About Myanmar - . background of