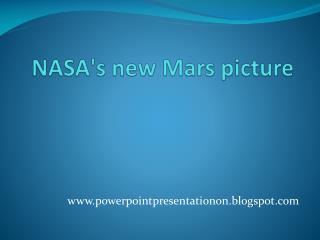 NASA's new Mars picture. www.powerpointpresentationon.blogspot.com. A full-circle scene combining 817 images taken by the panoramic camera ( Pancam ) on NASA's Mars Exploration Rover Opportunity. The US space agency NASA is calling it the "next best thing to being" on the Red Planet. . 50 years of NASA Spacewalks - Nasa is celebrating the 50th anniversary of the first american spacewalk, performed on june

Picture Storybooks - . a combination of the art of storytelling and the art of illustration. dr. chi-fen emily chen

Label the picture You have 60 seconds… - . convict. padlock. sum up this picture in one sentence:. at the start of the

20 mars 2009 - . a renewal story. safe harbor. this is an independent study performed by students from the faculté des

Formal Modeling and Analysis of a Flash Filesystem in Alloy - . eunsuk kang tds seminar, mar. 14, 2008. what is flash

Picture Prompt: “Do Now” - . basic: list all words and phrases that are associated with the picture. intermediate:

Welcome to Mars Hill - . the market place of ideas. we live in a jesus haunted, biblically illiterate society. ben