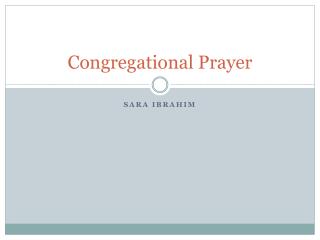 Congregational Prayer - . link with previous knowledge: share one hadeeth or ayah of quran about the importance of

Congregational Prayer for Asylum Seekers August 2013 - . our father… we acknowledge that you are our loving parent, the

CONGREGATIONAL FELLOWSHIP - . rom 15:25-27. new testament churches are made up of people who are &quot;called unto

Congregational Songs - . if i can dream if i had a hammer i’ll never leave you if i were free if life was gracious

Congregational Endowment Guide - . today’s endowment discussion. committing to the future what is an endowment?