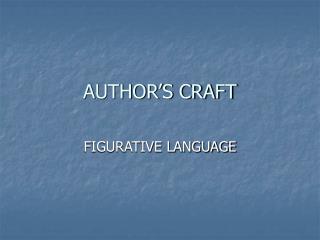 AUTHOR’S CRAFT. FIGURATIVE LANGUAGE. Metaphor. A metaphor is a figure of speech comparing two unlike things that have something in common. The comparison is made without using like or as. Joe is a nut .

Pleasure Craft Operators Certificate (PCOC) - . ch. 1 - preface. this course is not a boat-handling course this course

Comparison of two things with “like” or “as” - . simile. the attitude of the author toward the subject within a

Craft Lesson: Structure and Elements of Drama - . history of drama… . drama was developed more than 2,500 years ago.