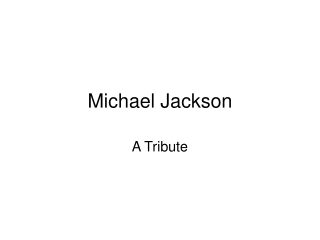 Michael Jackson. A Tribute. MJ was a cute baby. August 29, 1958. As a child, he and his brothers created the “Jackson 5” band. As a teenager, he started to sing by himself. He got so popular, he had surgery on his face to make himself ‘look better’. But then he bleached his skin.