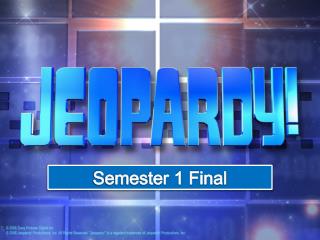 Semester 1 Final Practice - . 1)which of the following faults is the largest fault system in north america?. san andreas

Semester 1 Final Review - Sophomore english. semester 1 final review. question 1- 48%. what is the simple subject of this

Semester final - . by : jazmin esparza 1/25/13. internet safety. protect your information never give out your address to

Psychology Semester 1 Final Review - . two research methods widely used by psychologists are a. precognition and the

1 st Semester Final Review - . facts or opinion. facts are statements that can be proven. facts may be true or false. but

SEMESTER 1 FINAL REVIEW C - . i have created a pile of sheets. take a sheet. work on the sheet. you have been taught how