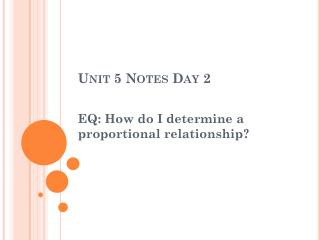 Unit 6 Notes Day 5 - . eq: how do i use a two-way table to answer questions about data?. complete the following

Unit 6 Notes Day 2 - . a correspondence is a way of matching up two sets of

Unit 5 Notes - . momentum. p=mv. in the last unit, we learned about conservation of energy. in this unit, we see

Unit 5-Week 2 Day 1 - . theme question: what makes the central region special? how are geography and economy connected in