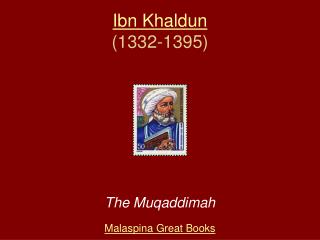 Ibn Khaldun (1332-1395). The Muqaddimah. Malaspina Great Books. Why we are reading this book a. Understand “Islamic” Paradigm b. “Islamic” Influence on Renaissance c. “Islamic” vs. “Christian” World Views d. Birth of “Scientific Method” e. Roles of “Science” in both Cultures

Ibn Khaldun (1332-1406) - . one of the major representatives of arabic/islamic science of the middle ages.

Notes on the political career of Ibn Khaldun - . carl ernst introduction to islamic civilization. in fez, round one.

Math 1332 - . chapter 12.1 data and analysis. quantitative data – can be measured with numbers and figures qualitative

Math 1332 - . chapter 11.7 still more probability and odds. formula review. with a permutation order is important. with a

Math 1332 - . draw without lifting your pencil or crossing (or re-tracing) any lines. chapter 10.7 non-euclidean

Aztec, Inca, and Mayan Early Civilizations - . aztec. map. emperors were elected by a royal council. the role of emperor

BEING HEAVENLY MINDED - . set your hearts on things above colossians 3,1. being heavenly minded (col 3). 1. calling of