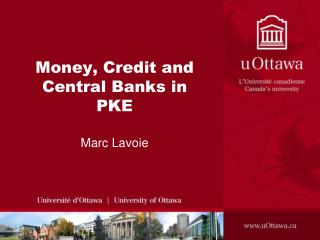 Money, Credit and Central Banks in PKE. Marc Lavoie. Outline of the chapter on PKE money. 1. The main claims of the post-Keynesian views on money, credit and finance 2. PK monetary theory in historical perspective 3. The horizontalist and structuralist controversies Money and Banks - . money supply. the money what is money? what form can money take? why is money worth something? what

Central banks in chaotic times - . implications of the financial crisis for central bank procedures and our understanding

Money and Credit in Monetary Policy - . based on work by: lawrence christiano, roberto motto, and massimo rostagno.