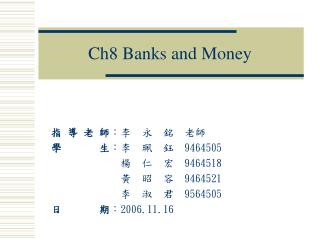 Money and Banks - . money supply. the money what is money? what form can money take? why is money worth something? what

How Banks and Thrifts Create Money - . most transactions are “created” as a result of loans from banks or thrifts.

Banks and the Creation of Money - . basic accounting and bank lending. for any business: assets = liabilities + capital.

Banks and the Creation of Money - . financial intermediary: go between borrowers and lenders. take deposits and give out

Money, Banks, and the Federal Reserve System - . what is money and why do we need it?. 1. learning objective. money

Money, Credit and Central Banks in PKE - . marc lavoie. outline of the chapter on pke money. 1. the main claims of the

How Banks &amp; Thrifts Create Money - . chapter 14. introduction. most transaction accounts are created as a result