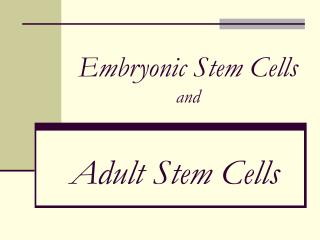 Jeopardy Chapter 7-Cells - A view of the cell the name given to the small box-shaped structures found in cork. what are

Topic 1: Body Organization - . zygote: fertilized cell created by the union of the egg and sperm &gt;200 types of

INTRODUCTION TO HAEMATOPOIETIC STEM CELL TRANSPLANT(HSCT) - . introduction. hsct is an approved curative option for the

Embryonic Stem Cells - . what is a stem cell?. stem cells are unspecialized cells that have two defining properties: the