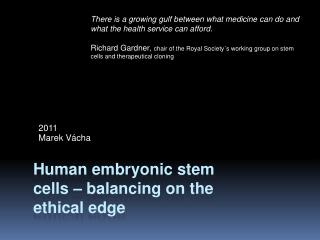 There is a growing gulf between what medicine can do and what the health service can afford. Richard Gardner, chair of the Royal Society´s working group on stem cells and therapeutical cloning. 2011 Marek Vácha. Human embryonic stem cells – balancing on the ethical edge. Introduction - Topic 6 image enhancement part 3. edges edge detection what’s an edge? “he was sitting on the edge of

Ethical Leadership - . fostering an ethical environment and culture. ethical leadership. activities on the part of

Human Participants Research at the University of Northern Iowa - . information for students, faculty &amp; staff at