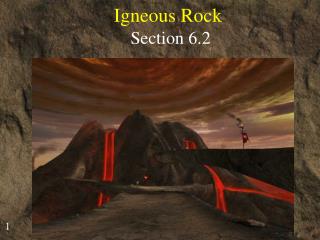 Section 6.2. Igneous Rock. Objectives. Summarize the three factors that affect whether a rock melts. Describe how the cooling rate of magma and lava affects the texture of igneous rocks. Classify igneous rocks according to their composition and texture. IGNEOUS ROCK NOTES - . i. what is a rock?. rock - two or more minerals (found in the earth’s crust) bound together

Volcano and Igneous Rock - . volcanoes can occur at. subducting boundaries hot spots any type of climate. volcanoes. they

Sedimentary, Igneous &amp; Metamorphic Rock - . sedimentary rock. what is it made up of? sand, clay, silt, organic