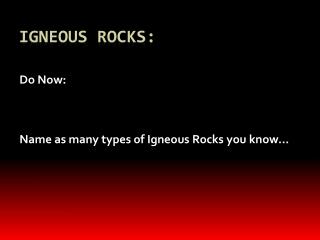 Do Now: Name as many types of Igneous Rocks you know…. Igneous Rocks: Igneous Rock. Objectives. Summarize three factors that affect whether rock melts. Describe how the cooling rate of magma and lava affects the texture of igneous rocks. The rock cycle - . weathering physical and chemical physical weathering- changes in the degree of consolidation with