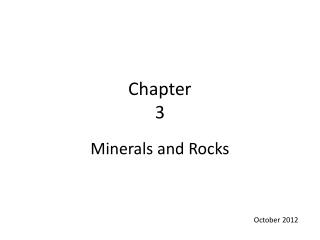 Chapter 3. Minerals and Rocks. October 2012. Introduction to rock-forming Minerals. The Earth is composed of rocks. Rocks are aggregates of minerals . Minerals are composed of atoms. In order to understand rocks, we must first have an understanding of minerals.