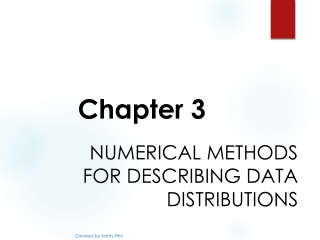 Chapter 3. Numerical Methods for Describing Data Distributions. Created by Kathy Fritz. Suppose that you have just received your score on an exam in one of your classes. What would you want to know about the distribution of scores for this exam? Measures of center Measures of spread.