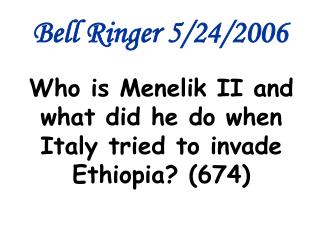 Bell Ringer 5/24/2006. Who is Menelik II and what did he do when Italy tried to invade Ethiopia? (674). Bell Ringer 5/25/2006. Using the map on page 672 write and answer the following question: “What native African states remained independent of European control during the colonial era?. Bell Ringer 5-12-17 - . using all available resources, determine the differences and similarities of the following:

Bell Ringer 12/5 - . please get out your flashback inventory and the short answer we wrote about sympathy in tragedy

Bell ringer 2/24 - Is the world overpopulated such that the government should implement measures of population control?.

Bell ringer December 5, 2011 - Get out questions from podcast with graphic organizer of all podcast topics from 27.1.

Bell Ringer 4/24 - . please get out your great gatsby movie essay and read it quietly to yourself. fix any errors you

2/24 Adv. Alg Bell Ringer - . get out a sheet of paper. i want you to be brutally honest when answering these questions:

Bell Ringer 5/14 - . what is a primate? use your textbook to answer this question- write a response in your notebook.

5/2 Bell Ringer - . you want to build a sandbox for your little brother. he just learned what the pentagon is, and wants

Bell Ringer – 10/5/07 - . what was the most challenging concept for you on our 5 week exam? how did americans feel