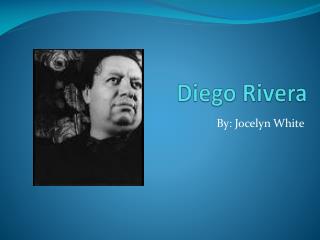 Diego Rivera. By: Jocelyn White. December 8 , 1886: Birth. He was born in Guanajuato City, Guanajuato to Diego and Maria Barrientos . He had a twin named Jose Carlos, who died at 16 months due to infections. His mom was Jewish and his dad was Spanish Nobility. Diego Rivera - . by: sage adams. diego rivera was associated with the muralist movement