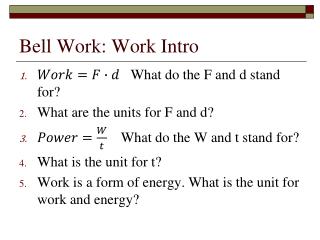 The Present Work of Jesus - . what work is jesus doing now?. introduction. will refer to jesus’ past work but not our

Bell Work - . main word/ idea: population(s) 1. write as much information as you can about:_

Work, Power, and Machines - . physical science – unit 7 chapter 9. work. what is work? work is the quantity of energy

Work and Energy : Forms and Changes - . what is work?. remember that a force is a push or a pull. work requires both