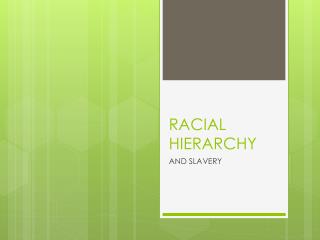 RACIAL HIERARCHY. AND SLAVERY. COLONIAL RACIAL THEORY. During the 18 th and 19 th century imperialist (empire-building) nations looking for colonies believed in a racial hierarchy. This hierarchy determined how they treated people living in countries they made into their colonies. Hierarchy - . overview background: hierarchy surrounds us: what is it? micro foundations of social stratification ivan

Hierarchy - . pecking order. year 13 biology. http://www.youtube.com/watch?v=zdzawgf_bk0. what is a

Hierarchy - . by mckayla sine. about hierarchy. it is an order from strongest to weakest, or alpha to omega. age

Hierarchy - . sta’s poniatowski , carly lear, and jessica faris. what is it?. a tool to differentiate between shapes,

Hierarchy - . overview background: hierarchy surrounds us: what is it? micro foundations of social stratification ivan

Racial Profiling - . by: kami marsh. racial profiling. “the consideration of race when developing a profile of

Racial Discrimination - . by: andrew richtmyer. discrimination denies important rights that the u.d.h.r (or the universal

Racial Profiling - . those profiled the most hispanics african americans those of jewish decent indians (india). examples

Racial Tolerance - . would you describe yourself as racist? why/why not?. recognizing our shared humanity

Racial Prejudice - . by: david williamson and yianni tsiamis. history of racial prejudice in u.s. racism has been a major

Racial Realism - . u sing membership in a racial group as a qualification b asing decisions on ethnicity/race to increase