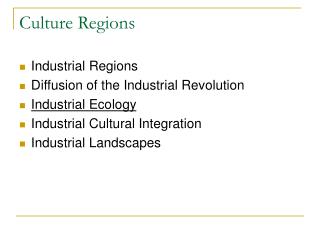 World Regions &amp; Culture - . different cultures: one world, many people. aim: how do we define a region, culture,

REGIONS - . regions. definition: geographers use the theme of regions to group places that have something in common. a

Regions - . by evan. a region is a area of land with all the same feathers there are five regions in the usa and four in

Regions - . may be defined by cultural and physical features. physical regions of the us. there are seven major physical