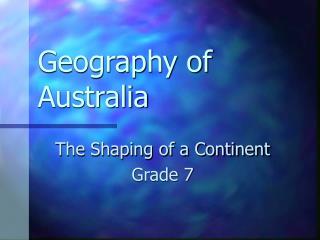 Geography of Australia. The Shaping of a Continent Grade 7. 7 th Grade Social Studies. Blueprint: Identify the spatial distribution of major ecosystems such as tropical rainforest, desert, and grassland.

History: Australia and Convicts - . how did we get the modern day australia?. geography. the continent of australia, with

Guess our new topic!! - . australia cultural context. lesson objectives. to reflect on what we already know about

What is Geography? - . ap human geography. geography is…. the scientific study of the location of people and activities

Australia and New Zealand: Powerpoint - . physical geography. australia and new zealand are between the indian and

Geography 2.3.1 - . the times, they are a changin’. today’s geography lesson. what we’ll cover the answers to the