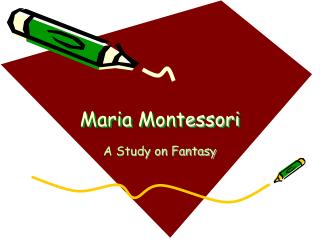 Maria Montessori. A Study on Fantasy. Maria Montessori. Born in Anacona, Italy in 1870 Graduated University of Rome in 1896 as Italy’s 1 st female physician Became professor of anthropology in 1904 Started Casa dei Bambini in 1907 Died in Holland in 1952. The Montessori Method.

Montessori/CMS 101 - . maria montessori. her goal through education was to raise a generation of people who would work to

Montessori Method of Education - . “free the child's potential, and you will transform him into the world ” maria