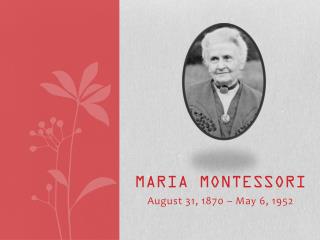 Maria Montessori. August 31, 1870 – May 6, 1952. The life and times of…. Born in Italy, Maria’s father was a soldier and her mother was well educated. She was Stubborn and Precocious. She excelled in school and was often the leader of groups and games. Maria Montessori - . a study on fantasy. maria montessori. born in anacona, italy in 1870 graduated university of rome in