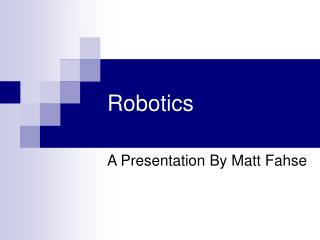 Robotics A Presentation By Matt Fahse Outline Introduction History Robotics Today The Future of Robotics References Introduction What is a robot? A machine that can do work Interacts with its surroundings Controlled by a computer (Bekey, 2001) Wikipedia, 2005 History

Robotics - . ?. designed for integrity. the need for robotic assurance. robert g parker. when considering robotics, what

Robotics - . “robot” coined by karel capek in a 1921 science-fiction czech

Robotics - . reprise on levels of language movement in a crowded workspace review for midterm lab: complete pick up,

ROBOTICS,. - Robotics,. submitted by., a.ruban dinesh. r.manoj prabhakar. m.reuban samuel. what is a robot ?. “a

Robotics - . robotics is the branch of technology deals with the design, construction, operation majority of robots use

Robotics!!!!! - A robot is any inanimate object that has been programmed to be humanistic and do human like tasks. by

ROBOTICS - . in the world and at signature. definition. a robot is an autonomous machine capable of taking input from its

Robotics - Can be helpful for aspirants in getting jobs across industries and government organizations such as nasa,

ROBOTICS - . introduction. the term robotics deals with the mixture of electronics, machine design, and computer

Robotics - . richard morton. my definition. robot: any autonomous mechanism that requires very little assistance from any