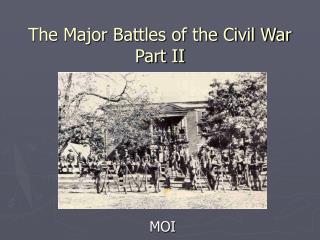 The Major Battles of the Civil War Part II

The Major Battles of the Civil War Part II. MOI. Learning Objectives. Comprehend and compare the battles at Antietam, Chancellorsville, Gettysburg, and the Wilderness Campaign Know and understand the significance of said battles and how they affected the outcome of the war

The Major Battles of the Civil War Part II

Tactics &amp; Battles During World War I - . how and where were the major battles of world war i fought?. schlieffen

Prompts - . a) what were the causes of wwi? l2: list the 4 causes and spark l3: above and gives an example of the four

Major Battles and End of WWII - . guiding question: what battles were major turning points that swung the course of wwii

The Civil War - . by #8. introduction . there were many wars and battles during the civil war more people died in this

Major Battles of WWI - . somme, passchendaele , vimy ridge, ypres, 100 day campaign. why do we learn about these

Welcome To Civil War Battles and Beyond!! - . here is a quick help session to navigate you through this presentation.

Civil War Battles of Texas - . early in the war, union ships began to blockade, or deny access, to southern ports. in

The Civil War Journey - . click here to begin!. navigation. to go to the next slide click: to go to previous slide

Major Battles in Ancient Greece Thermopylae and Marathon Why are these battles so important? - By: braden posey. battle