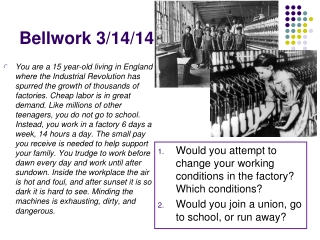 Bellwork (3/24/14) - . where is the earth’s magnetic field produced? the inner and outer core. magnetic storm. answer

Bellwork - . what is the conservation of energy? lab due tomorrow (fri. 1/17/14) energy can not be created or destroyed,

BELLWORK: 1/14 - . read page 494 in the textbook and answer the following: how was england’s government in the colonies

Bellwork - No clickers. bellwork. what is the arc length of an arc that travels through 50 o of a circle with radius 15

BELLWORK - . define the following words: totalitarian fascism communism what three things did germany have to do under

Bellwork - . what surrounds a wire that has current flowing through it? a magnetic field. due dates. tomorrow: rough

Bellwork # 3 - . judging by appearances, will the lines intersect?. 1. 2. 3. name the plane represented by each surface