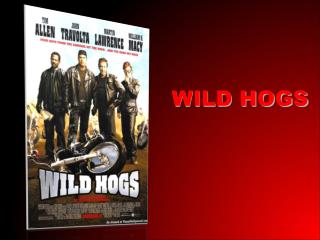 Wild Friends in Wild Places - . a case study in joining wildlife and habitats for grades k-2. center for wildlife.

Swine (Pig) Production - . swine history. even-toed hoofed animal genus; sus in the mid-west hogs are on 1 out of every 3

The Wild West - . on your white board, write “the wild west” and circle it. around the circle, write as many words as

INTO THE WILD - . swbat understand and analyze how epigrams are used in itw (into the wild). i will return your catcher

Getting to know your Eastside HOG Board: 20 Questions with Sheri Avey - . 1) how would friends in high school describe

Disease &amp; Parasites of Swine - . millions of dollars are lost each year by hog producers…. why????. because….