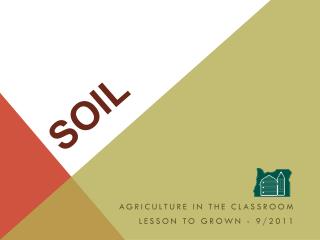 SOIL. Agriculture in the Classroom Lesson to Grown - 9/2011. Why are soils so amazing?. We depend on them for our survival Integral to ecosystems worldwide Soil is fundamental to understanding life on earth T he final frontier is right under our feet! It’s where we come from – our home. Soil - . objective: i will be able to explain what soil is and why it is important by creating an illustration. what is

Soil - . section 5.2. characteristics of soil. regolith – the layer of rock and mineral fragments that covers nearly

SOIL - . formation of soil and its types. soil. soil can be defined as the solid material on the earth’s surface that

SOIL - . the origin of life. objectives. explain why agriculture and all life is dependant on the soil. explain the

Soil - . november 7, 2013. so, what is soil?. the end product of weathering loose mixture of small mineral fragments,

Soil - . chemical properties. soil texture is a very important factor controlling how fast water can infiltrate into a

SOIL - . a resource our world depends on. sand small pieces of rock water and air humus (decaying plant or animal

Soil - . sol 3.7 . draw a picture for each word and definition. soil. what is soil? why is soil important?