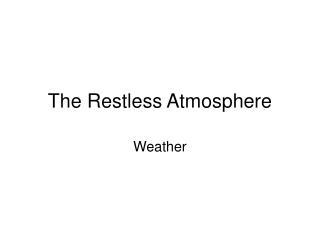 Restless - . your friend tells you she has to rest for the pssa’s a. say ok? b. say whatever?. your friend says please

The Restless Seas - . tides and waves. tides. the daily rise and fall of the ocean seen along the shore extremely long

The Restless Ocean - . kayla phillipson. exploring the ocean . ocean water is mostly salt water. what is s alinity? it is

The Restless Oceans - . 23.5. explain how the properties of ocean water change with depth. atmosphere &amp; ocean

The Restless Earth - . inside earth. your task…. you will design a diagram of earth’s interior to scale you will

Restless Continents - . continental drift : the hypothesis by alfred wegener that states that the continents once formed

GCSE Geography – The Restless Earth - If the yellowstone supervolcano erupted... volcanologists suggest: magma would be

New Topic: The Restless Earth - . learning objectives: to recap the structure of the earth, convection currents, and the

The Atmosphere - . by raj patel. composition. the earth’s atmosphere is composed of 7 primary compounds: nitrogen