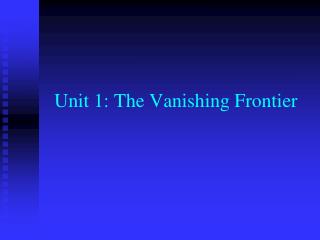 Unit 1: The Vanishing Frontier. Chapter 1 The Golden Spike. Indian Removal: Indians were forced to move to reservations by the federal government so white settlers could have their land. Land Hungry Settlers: wanted fertile land they could afford and adventure General Equilibrium - 2 production possibility frontier. the increasing amounts of one commodity that a nation must give

The Woods Were Tossing with Jewels - The life on the american frontier . the westward movement began during the colonial

Essential Question - . what affects did fighting on the frontier &amp; on the seas have on the american war effort?.