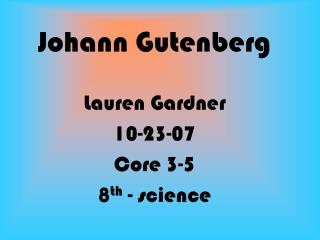 Understanding By Design: A “Backward Design” Approach to Teaching and Learning - . unlocking the keys to success and

Impact of the internet on language - . cyberspace and language change. internet. the medium with more significant impact

Johnny can’t Program (and neither can Johann) - . lynda a. thomas department of computer science, university of wales,

38g – explain the importance of Gutenberg and the invention of the printing press - . exercise. begin copying pg. 843

Johann Gutenberg - . important individuals of the renaissance. printing…. where in history have we seen printing