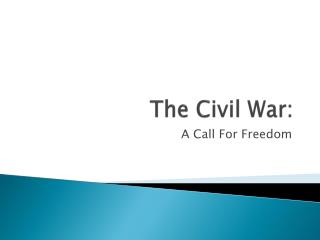 The Civil War:. A Call For Freedom. Slavery is Not the Issue…Yet. For the duration of the war, the main goal of the North had been to preserve the Union, not destroy slavery. Abolitionists did not control the North, or even the Republican Party. Civil War Unit Test Review - . how long did the civil war last?. 1861-1865. slavery in the united states was abolished by

CIVIL RIGHTS - . chapter 6 o ’ connor and sabato american government: continuity and change. in this chapter we will