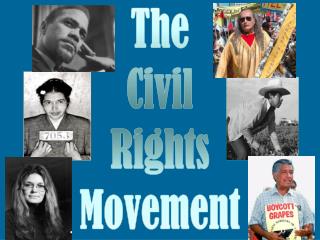 The Civil Rights Movement. What are “Civil Rights”. ?. Civil Rights means equal rights and fair treatment for all citizens as guaranteed by our Constitution regardless of race or other distinctions (such as gender , religion , sexuality , etc.). What is the greatest

CIVIL RIGHTS - . chapter 6 o ’ connor and sabato american government: continuity and change. in this chapter we will