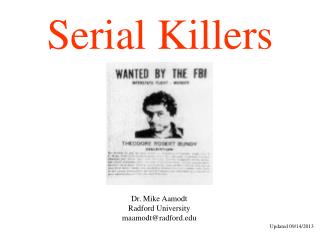 “A PICTURE IS WORTH A THOUSAND WORDS” “No Surprises, The Videotape Speaks and Shows, for Itself.” - . major

Serial Killers - . serial killers are a study in the psychopathic perversion - usually a man with a sexual dysfunction.

Forensic Psychology - . learning targets: 1. analyze the research on serial killers by experts on the field and apply it

By: John Ray - Serial killers. by: john ray. thesis statement. most serial killers kill because they often are abused or

The Anatomy of a Murderer - . by daniel randall. murderers and serial killers. a murderer is someone that kills another