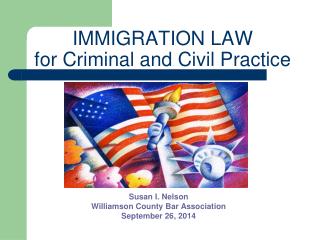 IMMIGRATION LAW for Criminal and Civil Practice. Susan I. Nelson Williamson County Bar Association September 26, 2014. DROP THE I-WORD. The “I” word presumes someone is guilty of illegal entry into the U.S. DROP THE I-WORD.