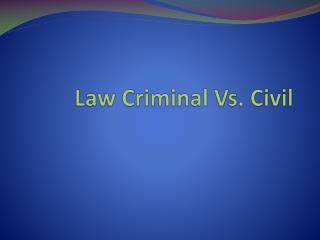 Civil Vs. Criminal - People vs people tort/lawsuit no punishment restitution vs retribution settle

Civil vs Criminal and Juries - . objective: students will compare and contrast civil and criminal court proceedings in

LAW: CRIMINAL LAW - . crimes. classifications of crimes. felonies. felony: a major crime for which the penalty may be