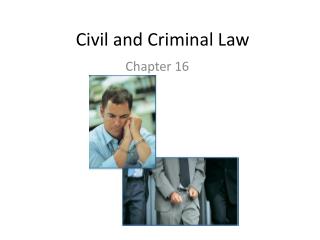 Civil and Criminal Law. Chapter 16. Plaintiff v Defendant. In civil cases the plaintiff –the party bringing a lawsuit –claims to have suffered a loss and usually seeks damages, an award of money from the defendant . LAW: CRIMINAL LAW - . crimes. classifications of crimes. felonies. felony: a major crime for which the penalty may be

Eldridge & Blakney PC- Define about the Criminal law and Civil law - Eldridge & blakney, p.c tell us about the