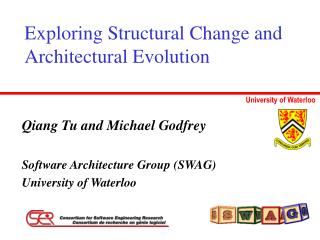 Exploring Structural Change and Architectural Evolution. Qiang Tu and Michael Godfrey Software Architecture Group (SWAG) University of Waterloo. Motivation. Change is inevitable Usually cheaper to adapt what you have Some change is “additive” … Evolution – How Change Occurs - . biology i honors – ch. 15. some things to keep in mind before we study

Structural change and the Kalman Filter

Experiments in Structural Change - . by: janeé franklin. introduction to sociology (soci 001). survey course in field of

Population Change and Evolution - . phylogeny. the history of the evolution of a group of organisms. adaptation – an