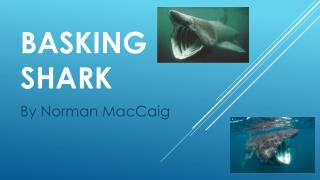 Basking shark. By Norman MacCaig. I can develop my knowledge of MacCaig poetry I can explore the use of poetic devices. Learning intentions . I must annotate the poem I should explain key quotations from the poem I could explore unfamiliar vocabulary. Success criteria . Basking Shark - . have large, oil-filled livers they can swim slowly without sinking have teeth, but are hardly used