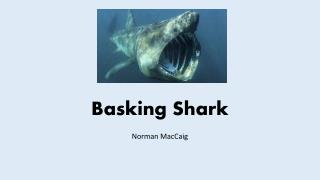 Basking Shark. Norman MacCaig. Context. Norman MacCaig divided his time mainly between Edinburgh, where he lived and worked, and the north-west Highlands, where he had relations and friends. This poem depicts the startling encounter he had with a basking Basking shark - . by norman maccaig. i can develop my knowledge of maccaig poetry i can explore the use of poetic

Basking Shark - . have large, oil-filled livers they can swim slowly without sinking have teeth, but are hardly used