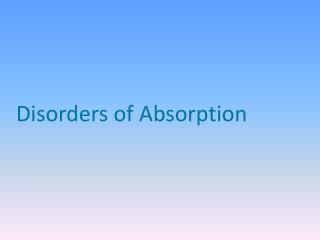 ABSORPTION OF TOXICANTS - . process by which toxicants cross the epithelial cell

Absorption of Nutrients - . learning targets: name the four layers of the alimentary canal wall and sate the function of

Absorption - . d. crowley, 2007. absorption. to know what happens to food molecules once they have been absorbed into the

Absorption - . bringing the dirty effluent gas into contact with the scrubbing liquid and subsequently separating the

ABSORPTION - . what is absorption?. absorption is the transfer of one or more materials from the gas phase to a liquid

Absorption of Digested Food - . absorption is the uptake of digested food molecules from the alimentary canal