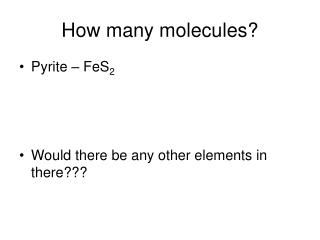 How many molecules?. Pyrite – FeS 2 Would there be any other elements in there???. Bangledesh groundwater. Most severe arsenic problem in the world. Shallow wells installed Area:147,570 km2 Population: ~128 million people. Natural source of Arsenic WHO drinking standard: 10 ug/L Chapter 5 Structure and Function of Large Biological Molecules - . what are the molecules of life?. because life is so

What Do Molecules Look Like? - . the lewis dot structure approach provides some insight into molecular structure in terms

The Molecules of Life - . within cells, small organic molecules are joined together to form larger molecules