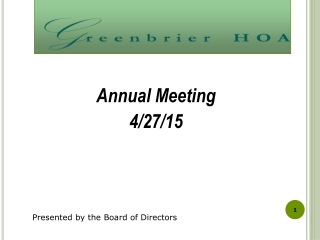 How to Conduct Annual Meetings without a Glitch - A major part of hoa management is conducting the annual meeting. but,

ICAEW ANNUAL MEETING - . 12 june 2012. annual meeting - resolution 1. to receive and consider the annual report of the