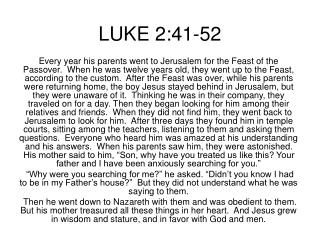 The Rosary - . the joyful mysteries of the rosary. to recite the rosary:. make the sign of the cross recite our father,

Catholic Essentials Chapter 2 Who Is Jesus? - . “for today in the city of david a savior has been born for you who is

Luke Chapter 22 - . following the celebration of passover in the upper room and before going to the garden of gethsemane,

The Gospel of Luke - . journey of jesus to jerusalem, and beyond. preparation for the journey. journey with jesus: in

Submission: Yielding of Our Will Luke 2:41-52 - . at jesus’ feet. submission: yielding our will. submission hupo =

Literary forms in the Gospels - . narratives…. ‘a narrative text tells an imaginative story although some narratives

6 Attributes of Jesus - . to help develop our character in a positive way, we can look at six attributes of jesus that

The Child in the Church Present Realities and Future Impact Dan Brewster - . does this reflect your attitude – or the

Chapter One Christian Doctrine: The Teaching of Christ - . prayer of the week the hail

* Prostration * - Then there will be righteous sacrifices, whole burnt offerings to delight you; then bulls will be